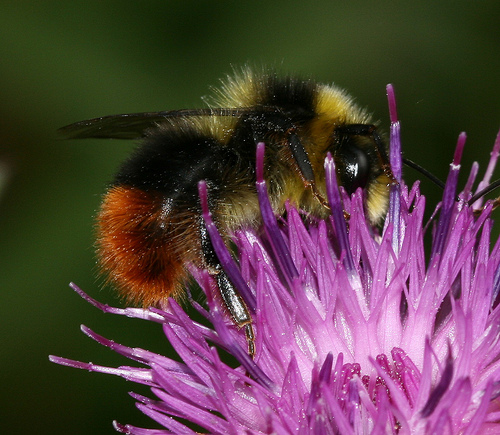 While on a wildlife tour with Jackie you can learn some interesting facts about nature in the Cairngorms National Park. Here are her observations on the Cuckoo bee.

Most people will be familiar with the cuckoo (Cuculus canorus). The medium-sized bird with the familiar disyllabic call. The females laying their eggs in the nests of other birds, especially meadow pipits, dunnocks and reed warblers.

Less well known is the fact that there are bees with a similar habit to that of the cuckoo. Other than honey bees most wild bee species are solitary. They do not have a complex social structure with queens and workers. Females of these solitary bees build their own nest, fill it with pollen, and then lay an egg in it. Often a nest contains several compartments with pollen on which the bee larvae will feed.

These bees are targeted by other insects that take advantage of the available shelter and food. The females of these cuckoo bees locate a nest of a specific host bee species and lay their eggs in the nest themselves. Cuckoo bees may revisit a nest from time to check if there is enough pollen for their future offspring to feed on. If so, the eggs are deposited and the pollen that was collected by the host bee will be eaten by these cuckoo bee youngsters instead.

On one of our tours we found the cuckoo bee Nomada panzeri (Panzer’s nomad bee): a little bee that looks a bit like a wasp because it isn’t as hairy as a lot of other bees and because of its yellow and dark red markings. The presence of this bee meant that its host species was likely to be around too. Sure enough, a female of Andrena lapponica (bilberry mining bee) seen. Females of this bee build their nest in the ground and visit mainly bilberry for nectar and pollen. Pollen is collected on the pollen sacks on the hind legs and later deposited in the nest for her offspring to feed on, or the offspring of the cuckoo bee of course.